By What Authority? (Reflections on Pentecost 17, Year A) 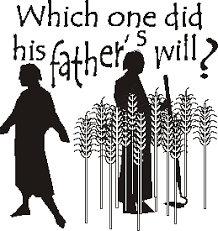 "By what authority are you doing these things, and who gave you this authority?” (Matthew 21:23)

Fake news. For my money, this is one of the most insidious expressions of our time. We already have COVID-19, but do we really need a second pandemic? A pandemic of lies, social media propaganda, gossip, disinformation, and an a concentrated effort by some to urinate in the swimming pool of public information and cause us all to question what to believe and who to trust? Are climate change and the coronavirus real, or did “science” get it wrong? Is there expertise or only opinion? Who can speak with true authority?

In the Gospel lesson appointed for Pentecost 17 Year A in the RCL (Matthew 21: 23-32), the official “authorities” are questioning the legitimacy of Jesus’ authority. This story comes right on the heels of the Palm Sunday story. Jesus has ridden his donkey into Jerusalem, boldly accused the leaders of the people of ripping off the poor, and has set up shop and begun to teach right in the holy temple itself. You can imagine how p.o.’ed  this has made the priests and the elders. They demand to know by what authority Jesus can do and say these things.

This doesn’t upset Jesus. He asks them a sneaky question of his own about authority. Where did the authority of John the Baptist come from? The priests and elders can’t answer this question. If they admit that John was a prophet sent by God, they’ll reveal their own hypocrisy by their refusal to repent when he called for repentance, compassion and equity[i]. If they denounce John, they’ll anger the crowds and reveal that they don’t really represent the people at all. All they really care about is their own prestige and power. So..? They give a mealy-mouthed, non-committal answer which gives Jesus the opportunity to tell a little parable which says, in effect, actions speak louder than words. These guys may have all the “correct” doctrine, but what they have done has ultimately been self-serving and oppressive.

What gives Jesus authority? It’s not just his words but his deeds. Yes, he’s taught powerful lessons, but the people have also seen the sick healed, the children blessed, the outsiders welcomed, and the sinners given a second chance. They have seen the hungry fed. They have seen the righteous sit at table with the outcasts, and they will soon see the Son of God hang on the cross.

Have you ever asked yourself why you are a Christian? I’d be willing to bet it’s because someone with Christ’s authority represented the Gospel to you. Maybe it was your mom or your grandmother or some other relative, but somewhere along the line you met a person whose walk with God in kindness, gentleness, and heroic faith was all the authority you needed. Righteousness is its own authority. So is love. So is compassion.

May the peace of God which passes our understanding keep your heart and mind in Christ Jesus.

Posted by Pastor Owen Griffiths at 11:09 AM

Does Heaven Have a Dress Code?

Some Bible passages really bug me. The Gospel lesson for the 17th Sunday of Pentecost (That's Lectionary 28 if you're keeping scor...