Saint Lucy Lights the Way (Reflections on Advent 3, Year B) 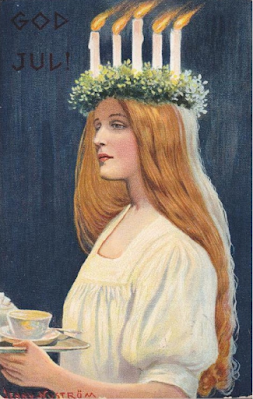 “The true light, which enlightens everyone, was coming into the world.” (John 1:9)

December 13, the Third Sunday in Advent in 2020, is also celebrated as the Feast of Saint Lucy. I’m all up for celebrating Lucy since her name means “Light,” and our Gospel lesson for this Sunday (John 1:6-8, 19-28) tells us that John the Baptist came to testify to the light. This is also that fun, “pink candle” Sunday called Gaudete or “Rejoice” Sunday. For the past two Sundays we’ve been anxiously awaiting Jesus to show up, but on Advent Three we get to jazz it up a little and just be happy knowing he’s on his way. In some churches they not only light a pink candle, but the paraments on the altar and the pastor’s vestments are also pink.

(Of course, since the City of Philadelphia’s COVID-19 restrictions have effectively shut down public worship at Faith, it really doesn’t matter what I wear this Sunday, does it?)

But back to Lucy. Unfortunately, there’s not a whole lot to rejoice about in this girl’s story. It’s pretty similar to a bunch of other martyr stories of young girls in the early Christian church. Lucy was a Christian girl living in the late third and early fourth century of the Common Era in Sicily, and she really loved Jesus. Her dad died when she was young, but left her some money so she could pay a nice dowry and find herself a rich guy to marry. When she came of age, her mom made a marriage arrangement with a pagan gentleman, but Lucy wasn’t interested in getting hitched. She announced that she’d dedicate her life to serving others, offer her perpetual virginity as a sacrifice to God, and give away all of her inheritance to help the poor. As you might imagine, this didn’t sit well with her prospective fiancé, and he complained to the local governor who ordered Lucy to get over herself and marry the guy or else he’d send her to the local house of ill repute to be violated. The rest of the details here are rather unpleasant, but the bottom line is Lucy was martyred on December 13, 304.

So why the pink candle and the rejoicing? Both Lucy and John the Baptist were martyrs, a word which literally means “witness.” Our job as Christians, this Sunday and every day—pandemic or no pandemic—is to be witnesses to the light of Christ. If we are faithful and believe that God has all of this in hand, we can rejoice even in the crappiest of times. Before our current Western calendar was set, December 13th had been observed as the Winter Solstice, the darkest day of the year. In a spirit of defiant joy, Christians would light candles and sing, knowing that the True Light was already in this dark world, the light of Jesus who loves us, died for us, and is always with us.

Whacky traditions which honor this day have been popular in Scandinavian countries, particularly in Sweden. Young girls sing in procession, all dressed in white robes tied with red cinctures. The white symbolizes Lucy’s purity, the red symbolizes her martyrdom. The lead girl will wear an evergreen wreath with lit candles on her head. Supposedly, Lucy, while ministering to the poor at night in the days before the flashlight, wore candles on her head in order to see better. Personally, I don’t recommend putting open flames on a young girl’s head, but the Swedes seem to be into this. There’s also a tradition that the oldest daughter in a family should rise early on December 13th, put on her white robe and red sash, light the candles on her head, and wake up her household by serving them delicious sweet breakfast pastries. Hopefully, she doesn’t wake them up by setting herself on fire!

(By the way, and I’m only guessing about this, I think the reason Lucy is on our Lutheran liturgical calendar is because of the Scandinavian ethnic connection. Those countries were probably celebrating St. Lucy Day before the Reformation, but, when they became Lutheran, they hated to give up the tradition.)

Whether we celebrate John the Baptist or Lucy this Sunday, let’s remember the words of John’s Gospel, “The light shines in the darkness, and the darkness did not overcome it.” (John 1:5) There is no better witness for our faith than the irrational, defiant joy of Christ. So light the lights, get those bakery sweets from McDonald’s, and remember Emmanuel—God with us.

Rejoice in the Lord always, and again I say, rejoice!

Posted by Pastor Owen Griffiths at 8:17 AM

﻿ ﻿ Fishing. I don't indulge in the sport myself. I guess I just don't like the idea that I have to kill something before I e...