Blessed Are the Obscure (Reflections on All Saints, 2020)

“Blessed are the meek, for they will inherit the earth.” (Matthew 5:5)

If ever a phrase contradicted our culture it would be the above phrase from Matthew’s Gospel. Meekness and humility just don’t float the boat of our celebrity-obsessed culture. Thank God for social media, right? It’s given us all the chance to show off our own accomplishments, brag about the places we’ve been, the meals we’ve eaten, and the pounds we’ve lost. I’ve heard it said that facebook has kept Americans perpetually in high school—we’re all still trying to convince ourselves we’re the cool kids who can make everyone else jealous.

Now along comes Jesus in our Gospel for All Saints (Matthew 5:1-12) and proclaims that the poor, the mourning, and the meek are the blessed ones. He tells us the favored are the ones who want to do right but keep seeing wrong. He claims that God loves the ones who give up, make peace, step aside, and don’t get any credit. He might as well have said, “Blessed are the obscure.”

Gosh. If we could only see with the eyes of God. Scripture tells us that God made the world and called all that was created “good.” Every individual life has an epic importance to the One who brought it into being. Why would any of us want to be a superstar in the eyes of the world when we’re already superstars in the eyes of God? I like the way C.S. Lewis explained God’s appraisal:

“…the dullest and most uninteresting person you can talk to may one day be a creature which, if you saw it now, you would be strongly tempted to worship…”[i]

I guess there’s something perverse in my nature that makes me look forward to those necrologies that are part of every entertainment award show on TV or every year-end news wrap-up. I confess to getting nostalgic over the loss of favorite actors, musicians, or other public figures. I try to be appreciative and inspired by the talents God has given others and by the contributions they have made. Nevertheless, I know that, in the eyes of God, the famous are no more celebrated than the dull, the average, the unambitious, and the forgotten. Sainthood is not a title conferred only on the most pious, spiritual, do-gooders among us. When Saint Paul used the term “saint,” he meant it to describe all of us who are made holy by the blood of Jesus—even if we don’t exactly look like angels and our resumes don’t land us on Wikipedia.[ii]

Lutherans haven’t always been big on canonized saints. The Augsburg Confession explains it like this:

“…our people teach that the saints are to be remembered so that we may strengthen our faith when we see how they experienced grace and how they were helped by faith…However, it cannot be demonstrated from Scripture that a person should call upon the saints or seek help from them, ‘For there is only one single reconciler and mediator set up between God and humanity, Jesus Christ.’ (1 Timothy 2:5).”[iii]

Now, as the autumn drops over us, we traditionally reach our thoughts back to the ones who aren’t with us any longer. On All Saints Day it’s only right that we strengthen our faith by the examples of saints who are dear to us—however meek or obscure they may be in the eyes of the world. Here are some we remember with love.

Bill and Cass Laigaie were faithful members of our congregation ever since they called on me to solemnize their wedding in 2001. Life doesn’t always give us second chances, but here were two older Americans who found love the second time around. I confess that it was hard to get to know Cass as she was, by nature, a very quiet and private person. Most of us now might think of her only as “that lady with Alzheimer’s” who sat next to her husband in the chancel while he sang with the Praise Team. I can tell you, however, that she was always meek, cheerful, and smiling before and after dementia robber her of her faculties. She radiated a natural kindness which so touched her husband’s heart. I have always been proud of how our congregation embraced her, inappropriate as she could be at times because of her condition. Having her around was a reminder of God’s grace. 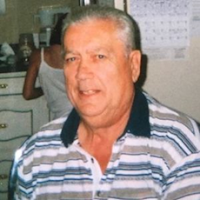 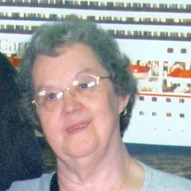 Bill, in his own right, was the most devoted spouse anyone could’ve asked for. He took “for better or worse” with the utmost seriousness. Although he’d often been advised to find a care facility for Cass as her memory began to slip, he refused to be separated from her, always insisting that he was called to be her chief caregiver. When she was finally confined to the Immaculate Mary Home, he visited her every day. He died within two months of her passing, and I imagine he just couldn’t live without her.

Kathy “Bunny” Berry, a devout Roman Catholic, came to Faith Lutheran when we welcomed her son Jason and his partner, Doug. As sweet as a Tastycake and as tough as an overcooked steak, Bunny loved worshiping with us. Her life hadn’t exactly been a day at the beach—she’d lost a husband to ALS and a son to drugs—but her faith in God never abated. I loved our visits when she went on the homebound list. In spite of her cancer she could always make me laugh, and her courage was inspiring.

Pastor Scott Nessel was a devoted single dad and a servant of the Gospel. We were students together in seminary, and I always found him to be one of the wittiest people I’ve known with a gift for an irreverent turn of phrase. I’m sorry I lost touch with him after seminary, but I’d heard through the grapevine about some of his domestic struggles (one of his children has special needs), and of his battles with recalcitrant congregations. Discipleship isn’t easy or fair, but blessed are they who hunger and thirst for righteousness. Scott had served his most recent parish, Immanuel in Amherst, MA, only a short while before COVID-19 shut its doors. He died unexpectedly in his sleep at the age of 49. 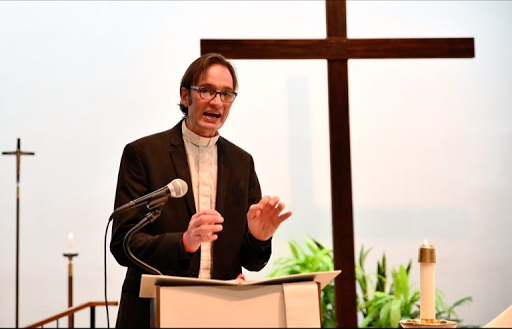 I would be remiss if I didn’t have us light a candle for Jim “Coffee Pot” Walsh. Although he was not a member of our parish, I’ve probably had more interaction with Jim in the last 22 years than I’ve had with some of our rostered members. Jim was the faithful coffee steward of the Auctus AA group. He’d sometimes come and put the coffee on at three o’clock in the afternoon for a 7:30pm meeting. Then he’d just hang around. I don’t know why Jim was the way he was—his sentences were full of non-sequiturs and often quite bizarre. I suspect he must’ve had some kind of brain trauma, but I never knew what caused it. As eccentrics go, he was high in the standings of odd characters who have frequented this church over the years. All the same, he was the most guileless individual, always seemingly happy, always willing to help, always offering me a cup of the particularly burnt and nasty coffee he’d brewed for his AA family. If his mind was somewhat scrambled, his heart was always on track. He will be missed. 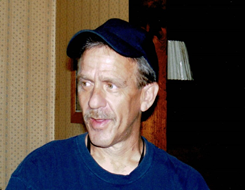 For the redeemed in Christ, there is so much beauty in ordinary lives. When we reflect on the lives of the saints—even these obscure saints—we are really reflecting on our own lives. God has given us wonderful companions on our walk to eternity. Some challenge us, some make our journey the more joyful. To see the beauty in these lives is to know that in Christ there is beauty, purpose, example, and mission in our own lives. To look to others is to see the love God has for us.

Bless you, my saintly friend. Thanks for visiting.

[i] This is from a sermon called “The Weight of Glory.” I quote it from A Chorus of Witnesses (Eerdman’s Publishing Co.: Grand Rapids, 1994) I don’t know when Lewis delivered this homily.

What Would John Tell Us? (Reflections on Advent 2, Year B)