The Truth King (Reflections on the Feast of Christ the King, Year B) 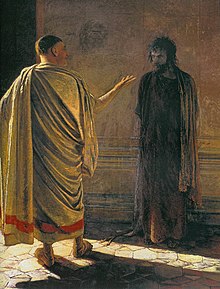 It’s an embarrassing thing for an American to admit (especially an American of Welsh ancestry), but I really love royalty. At least British royalty. I love the way they have weddings with parades. I love seeing the Queen’s Household Cavalry, and the scarlet uniforms and the music and the flags waving. Being a junkie for ritual, I just eat that stuff up. I love it when all the crowd starts singing “God Save the Queen.” It’s just so classy the way they do stuff over there in the UK.

As sad as it is to think about, I imagine I might just get to see a royal coronation ceremony someday. Not that I wish any harm to Her Majesty! She’s a swell old gal, but she is getting up there in years, you know. Eventually we’ll see a king sitting on the throne, and I’ll bet the show the Brits put on for that event will be pretty darn spectacular—fireworks and trumpets and God-knows-what.

But I’m given to understand that our friends across the pond are a little conflicted about the succession of their monarchy. The next in line, Charles, always seemed to me to be a pretty stand-up guy. He does a lot for charity and really cares about the environment and the poor. But he is a bit stuffy people say. He also committed adultery on his very popular Princess, and I’m not sure folks have quite forgiven him for that. The tabloids rumor that a lot of folks would much rather see the hip, young William, Duke of Cambridge leapfrog over his old man and be the new king. After all, he’s a good-looking, modern, family man with a gorgeous wife, adorable kids, and a charming smile. What more could you ask for in a king?

But rules are rules, aren’t they? Common folks don’t get to pick their king, they just have to take the one who is next in line or, as was done in the past, the one who is crafty and mean enough to beat out the competition. But if you got to choose a king, what qualities would you look for in him? In the Hebrew Scriptures book of 1 Samuel[i], the people of Israel demand that God give them a king so they can be like all the other nations. They want a guy who reflects everything that they hope to be. God gives them Saul, a tall, good-looking fellow and a fierce warrior who—for a while, anyway—is able to whoop their enemies and make the Israelites feel like they were really hot stuff.

I guess that’s important for the kingdoms of this world. We want a king we can admire, who is the embodiment of our ideal. We want him to be strong and ruthless and a terror to our enemies. We want him look like us. We want him to be adorned in glory and be a picture of wealth and aristocratic breeding. We want our kings to be GREAT.

When the people of Israel told the prophet Samuel they wanted a king, Samuel warned them that they were making a big mistake. They wanted a man of power, but Sam told them that his power could easily be abused, and in Saul’s case (to say nothing of the many who would follow him on the thrones of Israel and Judah), it was. Nevertheless, throughout history we have called for rulers who represent some false idea of ourselves. Years ago, I read Charles Bracelen Flood’s Hitler: The Path to Power. I was surprised (as, I guess any American might be) that there were some in Germany in the 1920’s who actually wanted a dictator. They wanted a strongman who would take over, knock some heads together, and make everything alright after the chaos of a lost war and an economic depression. They wanted a leader to reign with ruthless efficiency. Unfortunately, we too often get what we want and we suffer as a consequence.

The problem, of course, is that no earthly ruler is ever perfect. We look for a leader who is the image of what we think we want, but that leader will invariably turn out to be a false messiah.

In 1925, Pope Pius XI—after witnessing how kings, czars, emperors and Kaisers had managed to screw up Western civilization and cost the world 16 million human lives in the senseless slaughter of World War I—added the feast of Christ the King to the liturgical calendar. I guess old Pius figured it was time that we turned our eyes to a true king—a king who came to bear witness to the truth.

In the Gospel lesson for Christ the King Sunday (John 18:33-38), Pontius Pilate asks Jesus, “What is truth?” Pilate, the poor slob, hasn’t got a clue. He sees kings and emperors as an embodiment of what he thinks is greatness. But it’s a false greatness, because all have sinned and fall short of the glory of God. No matter how powerful a ruler may be, no one has complete control over the doings of this planet save God.

The king who stands before Pilate is the reflection of who we, as human beings, truly are. He was born a peasant. He was born homeless. He was a refugee[ii]. He was a worker—even the crown of thorns he was to wear was a symbol of dirt-scratching hard labor[iii]. He was unappreciated. He had family issues. He was lied to and betrayed. He lost loved ones. He was bullied. He knew physical pain and helplessness. He knew loneliness, temptation, and disappointment. He knew the truth.

We are so afraid of our own vulnerability, but Jesus wasn’t afraid of it. He came to share it with us. And if he can share our truth, can’t we share his love and compassion? If he can love us in our truth, can’t we love others in theirs? Christ our King is not a false image. He came to us with nothing to hide. He’s not a king who towers over us who will eventually disappoint us. He’s a king who stands with us. How full and meaningful our hearts and lives will be if we can learn to be his loyal and true subjects.

Thanks for visiting my site this week. I really am glad you came! Oh! And by the way, Christ the King 2018 marks my 20th anniversary as Pastor of Faith Lutheran of Philadelphia. My thanks to everyone who has made this part of my earthly journey so meaningful.

A Mild Rant About Confederate Statues and Other Stuff

“I am the Lord your God, who brought you out of the land of Egypt, out of the house of slavery; you shall have no other gods before me.” (...