Oh boy! Could there be a timelier topic here in the good ol’ USA for this Sunday’s Gospel reading than this story of Jesus’ twelve buddies on the road to Capernaum mixing it up about which of them was the coolest kid in the class? I say this as this reading (Mark 9:30-37) comes right on the heels of that magnificent Festival of Narcissism called the CNN Republican Primary Debate. Did you see it? Americans spent three hours last week watching ten men and one woman arguing about who was the greatest among them. All the candidates claimed to have won the argument, boasting that their skills, ideas, experience, successes, outsider status, wisdom, good looks, and underarm deodorant made them more qualified than their rivals to be the one who will “Make America Great Again.” 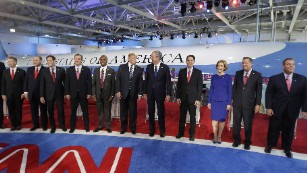 This gets me pondering two things: First, what does it mean to be great? What do you think greatness is, anyway? Would America be great if we were indisputably the wealthiest nation on earth with the highest standard of living? Are we great because of military power which allows us to open a family-sized can of whoop-ass on anyone who challenges our interests? Are we great because we can make the best cars, shoot the best movies, train the best athletes, and cook the best artery-clogging fast food? Does any of this make America great?

I guess we have to define what we mean by “great” or “greatness.” In the Gospel lesson, Jesus defines it through a willingness to serve others.

“Whoever wants to be first must be last of all and servant of all.” (v.35)

The lesson starts with Jesus teaching these guys that he must give up his life in order to be raised by God. They don’t get this (not that I would either if I were in their place!), but they’re too stuck on their own egos to be humble enough to ask for clarification. Jesus has to explain to them that greatness can only be found in humility and sacrifice. To illustrate his meaning, he points to a little kid. Now, in the world of the text, kids were virtually property. They had no importance whatever. If you were a kid, you were pretty much the slave of your parents. I always imagine that Jesus was pointing to a little girl, because she would be seen as being even less significant than a little boy. Then he exhorts these self-aggrandizing male disciples to treat this child as if they were treating their respected rabbi. “I’m here,” Jesus seems to be saying, “in the least important, least powerful, least wise, and least wealthy in your society. I expect you to treat such a one as you would treat me. When you do that, you’ll be in relationship with the Father God. That’s greatness, boys!”

Maybe that’s a cool definition of greatness—the persistent desire to see Christ in others and be Christ for others. I’ll admit, this takes some work. I don’t know that I’m very good at it myself. But that’s the kind of greatness which outlasts all others in my book.

But let me get back to my second question about Making America Great. I’d like someone to tell me: when did we stop being great..? Did I miss something here? Yeah, sure, I know that there are millions of problems in this country with poverty and violence and education and healthcare and the environment and criminal justice (or lack thereof) and tons of other stuff. But I still think our national greatness lies in our belief that all people matter. We still try to provide—however ineptly—education to all of our children. We still believe in care for our elderly through sacrificial social programs. We still reject (I hope!) military force as the first solution to solving international problems. We are still able to speak our minds openly. We still respect freedom of religion. We still provide generous aid to other lands in time of famine, drought, and natural disaster. That all sounds pretty great to me. When the day comes when we as a people reject servanthood for self-interest we will cease to be great and will justly deserve the inevitable decay which must result from pride without compassion.

Thanks again for checking out my blog. You know I love it when you stop by!
Posted by Pastor Owen Griffiths at 4:44 PM

What's Up With Tattoos? (Reflections on Pentecost 19)

Pastor Owen Griffiths
I'm a 50+ Lutheran clergyman in Philadelphia trying to make peace with the twenty-first century. I love high church liturgy, gospel hymns, and all the fancy bells and smells. Mostly, I love to share the mythical, mysitcal story of my faith. Lately, however, I've been wondering if anyone's listening. BIO: I was born in Lawrence, KS and grew up in Long Beach, CA. I hold a BA from California State University-Long Beach and a Master of Fine Arts from the University of Wisconsin-Madison. I've lectured in the Univ. of Wisconsin system and at Long Beach City College. I've also taught learning disabled teens in the Los Angeles School District before earning a Master of Divinity from the Lutheran Theological Seminary at Philadelphia. I am married to a beautiful lady who is also a Blue Star Mother and tireless advocate for returning veterans.