Going All the Way (Reflections on Transfiguration, Year B) 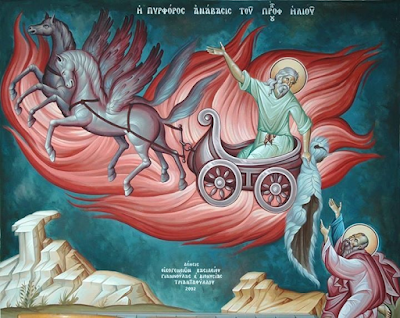 “And there appeared to them Elijah and Moses who were talking with Jesus.” (Mark 9:4)

The Feast of the Transfiguration is always problematic. Just what do we do with this passage (Mark 9:2-9 in the RCL this year) in which Jesus appears to be the model for an OxiClean commercial? And what’s up with the special guest appearances by Elijah and Moses? Haven’t you ever wondered how the three disciples knew the guys they saw on the mountain with Jesus were Elijah and Moses? I mean, there weren’t any photographs in those days, and the two prophets had been dead a pretty long time.

I think most of us are pretty familiar with Moses. After all, haven’t we all seen Cecil B. DeMille’s 1956 turgid opus The Ten Commandments? ABC-TV runs it every year around Easter time. It’s pretty corny by today’s standards, and I think it might unintentionally tell us more about 1950’s America than it does about the Book of Exodus. Elijah, however, may not be quite so well-known unless you’ve spent some time ploughing through the Hebrew Scriptures.

The Revised Common Lectionary pairs the story of Jesus on the mountaintop with the story of Elijah being carried away to Heaven in a chariot of fire. I suspect that the common link is the inspiring view of God’s glory, but I think there’s a bit more in the First Lesson (2 Kings 2:1-12) than that.

Now, just by way of introduction, Elijah is a pretty badass prophet. A polite, non-violent Gandhi or Martin Luther King, Jr. would pale in comparison with Elijah. Even Jesus and Saint Paul look pretty tame next to this guy. He’s more like Martin Luther at his angriest or a strident Malcom X or the incendiary John Brown. He calls ‘em as he sees ‘em, and he has no mercy for those on the wrong side of God’s law. He’s certainly not the most charming or lovable guy in the Bible.

Back in 1 Kings 19 Elijah takes on Elisha as his protégé. He sees this young guy working in the field with his team of oxen, and he throws his mantle over him by way of saying, “God’s calling, and you’re coming with me, Son!” Elisha says his good-byes to his folks, slaughters his oxen and gives the meat to the poor, and then sets out as an apprentice prophet. In the story in our First Lesson, he begs to be able to follow Elijah on the old guy’s farewell tour, even though Elijah tells him he doesn’t have to. What moves me is Elisha’s faithfulness. He knows the old prophet isn’t long for this world. Everyone who sees Elijah knows he’s going to be meeting his maker in short order, a fact which Elisha doesn’t want to discuss. But Elisha seems determined to stay with his mentor right up to the end. When Elijah asks him what he wants in return for his faithfulness, Elisha replies that he wants a “double portion” of the prophet’s spirit. That is, he asks to be his heir and successor.

What strikes me about this is that Elijah, with a little advice from God, had planned on making Elisha his successor all along. Now, however, Elisha is at a point of wanting this for himself. It’s not always just a matter of having the gifts for a job. You’ve also got to have the desire to do it. Sometimes we need a good teacher or coach to help us see our own strengths and find our own purpose. Such a person becomes like a parent to us. Note that Elisha calls Elijah “Father” in verse 12.

As Elisha commits himself to following Elijah right up to the moment the old boy is carried up to Heaven, so Peter, James, and John will commit themselves to following Jesus to the end. Unfortunately, their journey isn’t quite as faithful as Elisha’s. When things get sticky, they run away. Yes, ultimately, they’ll see Jesus ascend to the clouds, but they get a little queasy about watching him die on the cross. Unlike Elisha, they’re not quite in it for the whole journey.

In the disciples’ defense, I’ll admit it’s not easy to stick with someone who is about to die. Nevertheless, it is, if you've ever done it, a tremendous honor. Like it or not (and confused as they are!), the boys are called to come down off the mountain and start this journey with Jesus towards Jerusalem and Calvary. We, too, are on this journey. Transfiguration ends the Epiphany season and starts us on the journey of Lent, a journey which begins with ashes on the forehead, a reminder that we are dust and to dust we will return. But, like Elisha, the mantle has been thrown over us. We are called to faithfulness—to God and to each other. And God, in God’s mercy and grace, offers us those little sneak previews of glory which give us courage to go the distance.

May you be dazzled by the brightness of God, and may God’s peace be with you.