Of Guns and Sheep (Reflections on Easter Four)

It's been well over two weeks since my last post, but I've taken time off to deal with some very important family issues. Please forgive my tardiness.

If these events were not, in and of themselves, insane enough, Americans have also seen the refusal of our Senate leaders to close the "gun show loophole" and demand universal background checks for all firearm purchases in the United States. Can you believe it? With polls showing a substantial number of Americans calling for gun purchase reform to prevent firearms from falling into the wrong hands, the U.S. Senate still refused to do anything.

A few weeks ago I attended a social event and met a military veteran of the Viet Nam era. He told me he had recently had an intense argument over gun control with some pro-gun individuals. In an exasperated moment the veteran asked, "So what kind of gun do you think Jesus would prefer?"

I don't think this has anything to do with politics anymore. I think this is a matter of our national soul.

My theory? We can't deal with the growing sense of powerlessness we feel in this chaotic world, and we want to know that we have some kind of control. Owning a device which gives us the ability to take human life mesmerizes us into a deluded state of having some kind of power. In a world filled with bullies and victims, we prefer to be the bully.

I don't know about you, but in a world full of bullies and victims I don't want to be either. I would like to believe that if I were truly put into such a position, I would be willing to die for the cause of the gospel (although I truly fear that I am nowhere near that brave!). But I cannot fathom how awful it must be to take the life of another human being--even in self defense. I have never discharged a firearm, and I have no desire to do so.

Violence, as we all know, begets more violence. But victimization, as the psychotherapist Thomas Moore suggests in his 1992 bestseller Care of the Soul, can also be a form of passive/aggressive violence. The gun lobby is very adept at playing the victim--attempting to coerce the public and our lawmakers into sharing its point of view by conjuring images of an oppressive government bent on depriving Americans of their God-given liberties.

In a world of bullies and victims, there must be a third option. For my part, I'd rather be a sheep. Jesus says,

"My sheep hear my voice. I know them, and they follow me. I give them eternal life, and they will never perish. No one will snatch them out of my hand." (John 10:27-28)

We often think of sheep as being docile imbeciles, blindly following the shepherd, going with the crowd. But sheep actually have a relationship with their shepherd. They know that this is the guy who provides for them--making them lie down in green pastures, leading them beside still waters and in the right path.

At this point in my life, I hope I have come to terms with my own powerlessness and weakness. I will get my way or I won't. But I am in God's hands all the same. I don't want to intimidate and I don't want to complain. I want to live my life in this Valley of the Shadow of Death fearing no evil because God is with me. I want to trust. That's all.

Thanks for reading, my dears. Take time to say "Hello," won't you?
Posted by Pastor Owen Griffiths at 7:19 PM No comments:

I'm a little jealous of the Very Reverend Gary Hall. He beat me out for my dream job of becoming the Dean of Washington's National Cathedral last October. I, unfortunately, was not on the short list for this post. It seems that the deanery of the National Cathedral always goes to an accomplished and prominent Episcopalian cleric. This knocks me out of the running because
a) I'm not an Episcopalian, and
b) I am in no way accomplished or prominent.
Shoot. It sure would be nice to be the honorary pastor to the whole nation and preside at the funerals of presidents and other potentates. Also, the NC is a pretty swanky place. Just look at it: 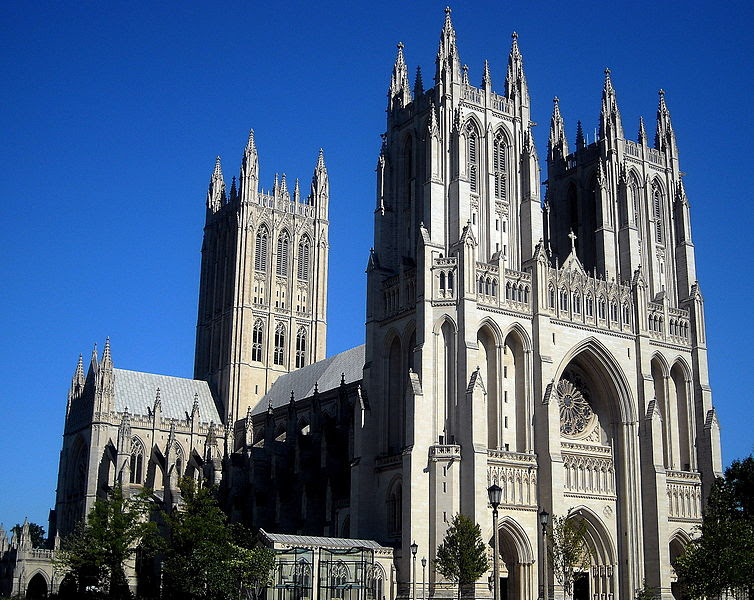 What's more, the Dean of the NC gets to be interviewed on National Public Radio and can make all kinds of interesting announcements. Recently I heard Dean Hall announce that same-gender marriages will be permitted at the NC as such unions are legal in the District of Columbia. At the time of the interview (January 9), however, the Dean did not have such a wedding on the NC's schedule﻿.
Well this is one time when I get to scoop the National Cathedral and announce that little (but charming) Faith Lutheran of Northeast Philadelphia actually has a same-gender union scheduled for December of 2014. Currently, such unions are not recognized by the Commonwealth of Pennsylvania, but I'm going to pray that the Commonwealth gets its act together by December of 2014 so I can perform a real marriage and not just a blessing.
I support the legalization of such unions because I believe, as one of our nation's founding documents has asserted, "all men are created equal." Unfortunately, until this civil liberties question is addressed, many of our citizens will not have the legal rights to certain tax and health care benefits, nor the rights to adoption, health care surrogacy, and inheritance enjoyed by straight couples. This is unfair and unjust.
There are some Christian who will debate that blessing same-gender couples is a violation of scripture. To a point I will agree. Homosexuality is clearly forbidden in Leviticus 18:22. I would point out, however, that the author(s) of Leviticus also advocate the exiling of anyone with a skin disease (chapter 13), the quarantining of women during their menstrual cycle (chapter 15), the death penalty for adultery (20:10) and the speaking of blasphemy (24:14), and pronounces the eating of rare meat to be an abomination (chapter 17). There seems to be no problem with slavery, however, and men who have sex with slave women are exempt from the death penalty (19:20). Go figure.
Obviously, our understanding of human relationships and human rights has evolved since the time of the Old Testament. My church teaches that we interpret the parts of scripture we don't understand in the light of the parts we do understand. And we understand that our risen Lord, Jesus Christ, has come to die and ransom all of us--male, female, straight, gay, all races, and in all walks of life. Jesus tells us in John's gospel,
"And I, when I am lifted up from the earth, will draw all people to myself." (John 12:32)
I am very proud of the open welcome shown in my congregation and my denomination to same-gender oriented Christians. As yet, neither the Evangelical Lutheran Church in America nor the Episcopal Church, USA have official liturgies for same-gender unions. Fortunately, I have well over a year to write one.
I salute you, Dean Hall, for your bold public stand on this issue, and I am proud to have you as a brother in Christ and a fellow clergyman. I pray that your voice on the national stage will be heard across our land and usher in a new era of welcome and equality.
Thanks for reading, friends. Let me know what you think.
Posted by Pastor Owen Griffiths at 2:28 PM 1 comment: