You know what I loved as a kid growing up in the sixties? 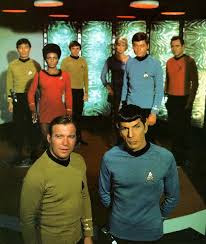 
No. I'm not a geeky “Trekkie” (my sincere apologies to you geeky Trekkies out there), I just liked the idea of a future filled with really cool stuff. I mean, there was space travel, for cryin' out loud! And little tiny boxes with flip-up lids that served as communicators. They had computers that could both talk and listen to you, whole libraries of information you could hold in the palm of your hand, and two-way video communication.

What's more, the future depicted in Star Trek was a world at peace. Russians and Americans worked together. Women and men were equal (okay, except for the miniskirts the women crew members wore—that was still a little sexist, wasn't it?), and racism seemed non-existent. They even got along with people from other planets. How cool was that?

In the almost half-century since the premier of Star Trek, lots of progress has been made down here on good ol' Planet Earth. We have the fancy computers and communicators prophetically suggested by that classic TV show. We've traveled to the moon and put a working probe on Mars. We've even made a little progress towards gender and racial equality (although we still have lots of room for improvement on those scores). The Cold War has ended, and we've made some progress towards welcoming people who once seemed very different from the mainstream. No space aliens yet, but if you've ever taught teens in Confirmation, you might think you've made extra-terrestrial contact.

But with all of this cool technology, we still live on a planet threatened by pollution and climate change. One in every eight people on this globe survive in the most degrading of poverty—living on about one US dollar per day. An almost equal number lack access to clean drinking water, and a person in the developing world is more likely to have a cellular phone than access to proper sewage sanitation. Malaria and HIV are still raging, as is human trafficking. 300,000 to 500,000 Americans are still homeless. Wars, revolution, and violence still fill the nightly news.

This planet still needs a reformation.

So what do we Lutherans have to celebrate on Reformation Day? For one thing,we celebrate that once a brave little monk had the courage to tell the truth. When Luther posted his 95 Theses on the door of the Castle Church in Wittenberg on that October day in 1517, he was proclaiming the teaching of John 8:32:

“...and you will know the truth, and the truth will make you free.”

And what was that truth? We are all slaves to sin—to our selfish, greedy, inconsiderate, angry, stubborn natures. But God still—in spite of everything—loves us enough to die for us. And we are set free by the love of the Son, not by the edicts of the Church. Luther's audience was freed from the tyranny of an institution which sought to obtain obedience through the terror of conscience, and one which gave tacit approval to oppression, subjugation, and poverty. Luther taught his people that the gift of baptism:

“...brings about forgiveness of sins, redeems from death and the devil, and gives eternal salvation to all who believe it...” (Small Catechism, 1528)

This promise changed the course of Western history.

I wonder, however, what Luther would do with the Church of today? To what are we still slaves? I'd say it's to institutional survival. Either that, or to a preoccupation with individual salvation, a concern about our own spiritual comfort and a discomfort with anything which might be controversial.

But Luther saw a church which was constantly in the act of reforming, a church where all the people were priests doing the work of God. After almost 500 years, we still have a lot of work to do before God's law is written on all of our hearts and we all—from the least to the greatest—know and act on the transforming power of God's love.

I keep praying for an ongoing Reformation, and a Church with a constantly changing heart and mission to the poor and helpless of this world—a priesthood of all believers moving forward in the faith of a loving and mighty God. We can do this, people! We have the power to change things, to invent and imagine. Christ sets us free from our doubts, preoccupations and preconceptions about what is and is not possible. If we can break free from earth's gravity, we can break free from global poverty. With Christ's passion in our hearts, there is no limit to what the people of God can accomplish.

Thanks for dropping in, fellow priest.

PS-Here's a radical idea: In honor of the 500th anniversary of the Reformation coming up in 2015, let's ask Pope Francis (he seems like a pretty cool guy) to invite Lutherans back to the table of Holy Communion. Let's show the world that what we Christians—Protestants and Catholics—have in common is more important than our tiny differences. Interested? Click on my petition here.
Posted by Pastor Owen Griffiths at 3:24 PM No comments:

We were having Sunday mass at Faith Lutheran Church and I was distributing the sacrament. The Praise Team was singing the communion anthem behind me. They were a little off rhythm because most of them hadn't been to rehearsal that week. Not that it mattered. They were so uncertain of the new hymn that they all kept their mouths far enough away from their microphones so no one could hear them anyway. Which was also just as well because the sound system was out of balance and giving us feedback.

David, a sweet but mentally challenged young man from the neighborhood, was walking in and out of the worship space. This would be a little distracting, but the neighborhood kids playing ball right outside the church windows were creating enough of a distraction to keep most of the worshipers' minds off of prayer or the sacrament. Although, I really don't mind the ball-players that much since they create less of a ruckus than the property committee when they decides to run the lawn tractor during worship time.

Of course, scores of little kids were fidgeting, giggling, and squirming during the distribution of the mass, but this was not really as much of an issue for me on this particular Sunday as Jack, one of the neighborhood guys, had stumbled into worship that morning. Jack—God love him—is out of work and suffers from health problems and emotional issues caused by childhood traumas and combat experiences. He comes by every once in a while to ask me for a few bucks or to attend an AA meeting. I handed him the wafer as he knelt at the altar rail.

“Hey, Father. Can I speak to you for a minute?” Jack asked. He reeked of alcohol.

I was standing at the altar, cyborium in had, right in the middle of public worship. “Uh, I'm a little busy at the moment, Jack. Can it wait 'til after church?”

“Just pray for my friend. He died last night.”

“I will,” I said. Jack walked back up the aisle and left the church. A kneeling communicant smiled at me and shrugged her shoulders.

I looked around at our make-shift worship space. It's a 1950's style “first unit.” That is, it's a collection of cinder blocks intended to be only temporary, but it has turned out to be the permanent church for this community for over fifty years. It's not aesthetically pleasing nor is it particularly functional as an architectural space. It is merciless to the handicapped and inadequate for a large Sunday School. Things in this building tend to break down or clog up with startling regularity. But we make it work.

I thought to myself, “This is the REAL church.” It's imperfect and full of problems—spiritual, financial, personnel, and otherwise—but it's where the people of God are and where I am.

I've been pastor here for almost fifteen years and I've learned to see this as a holy place. I've learned to love the people, to rejoice and mourn with them. I could certainly wish for a fancier, more pious, and more financially secure congregation, but after hanging on here as long as I have, I realize that I am blessed. Just like Jacob at the ford of the Jabbok (Genesis 32).

It may be easy to see God as the unjust judge Jesus describes in Luke 18, deaf to our needs, our cries, and our prayers. But Jesus counsels us to be persistent. Our circumstances may not change, but our hearts will.

Thanks for dropping by.

Hey..! I really do believe in being persistent. Let's ask Pope Francis to open the communion table and worship with us Lutherans once again. Sign my petition by clicking here.

Posted by Pastor Owen Griffiths at 3:38 PM No comments: