A New Chapter (Reflections on Lent 1, Year B) 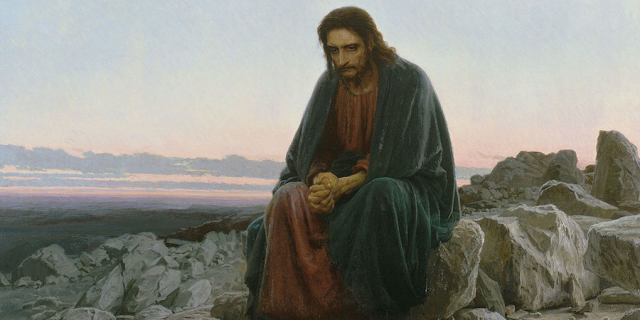 If you were to write a book about your life, how would you define each chapter? How do you know when one part of your story ends and another part begins? What chapter are you in now? When did it start? How do you think it’s going to end?

For our evangelist Saint Mark, the real story of Jesus begins with our Gospel reading for Lent 1 (Mark 1:9-15). Yes, he gives a little back story about John the Baptist, but that’s just to set the scene for what starts at verse 9. Mark can’t be bothered by Jesus’ early life. He doesn’t even have a good Christmas story to share with us. For him, the show starts when the adult Jesus gets baptized and begins his ministry. That’s when God rips the heavens open, sends down the Holy Spirit, and starts a new relationship with us—his spoiled, self-involved, and bratty kids.

This is a place where the Old Guard gives way, too. John the Baptist winds up in the clink (and gets beheaded to boot!), and Jesus takes over as the new prophet on the scene. John’s done his job. He’s got people ready for Jesus. Before John, any pious Jew could have his sins forgiven by making an animal sacrifice at the temple, but John’s got folks actually washing themselves, getting spruced up for the change that was about to come. This may have been cheaper than giving a priest a goat or lamb, but it was certainly more personal. Jesus joins with them—with us—in this ritual as another sign that God, who seems so distant, has actually chosen to come near.

Of course, nothing new ever starts without a few hiccups. You know the old joke: How many Lutherans does it take to change a lightbulb? The answer: None. Lutherans don’t change anything.

Change is hard, after all. If you’re a pope and you want folks to hear the mass in their language so they can understand it, there are going to be some who’ll complain they liked Latin better. If you’re a president and you create a social safety net, there will be some who’ll complain that folks should look after themselves and not expect the government to do it. If you’re a tech entrepreneur and you create a new gadget to bring people together, there will be some who’ll refuse to learn how to use it and will claim it’s ruining society. Every change will come with the loss of something or with some resistance or with some problem you didn’t count on. You can bet on it.

It’s no surprise when Jesus joined us in our bath water the spirit drove him out to where Satan (literally “the adversary”) attacks. No new beginning or new chapter is every really easy if it’s worth starting at all. (If childbirth were easy, men would be doing it, right?) We will always face a temptation to just chuck it and go back to the way things used to be.

But, for our sake, Jesus faced the wilderness. The forty days may be meant to remind Mark’s readers of the forty years the Hebrew people spent in the wilderness before God made them a real nation again. It could also just be a literary device meaning “a pretty long time.” Sometimes it feels like a new start takes forever. The wait in the wilderness is filled with dangers like “wild beasts,” as well as with the dull, boring emptiness and lack of refreshment.

But there are also angels in the wilderness, messengers from God who remind us why we’re there and why we need to keep going.

The late Christian writer Phyllis Tickle often wrote that we are entering into a new chapter in the life of the Christian faith. She noted that about every 500 years or so, something happens which shakes up our structure and sends us on a new path. We’re just about due.

If more Americans identify as having no religion at all, it simply means that we Christians have a larger mission field. If COVID-19 temporarily closes our houses of worship, it gives us a chance to begin our cyber ministry. If our nation seems divided, we then have an opportunity to be the inclusive peacemakers. If we’re fed up with listening to “wild beasts,” maybe we should start appreciating the angels God’s put in our lives.

The time has come. It’s time to wash off the old and believe that God has a new chapter in store for us. Let’s enter this Lenten season with repentance and rejoicing.