Listen Up, Folks! (Reflections on Epiphany 2, Year B) 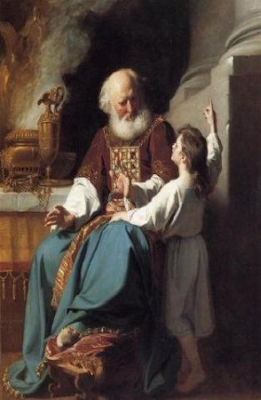 Pastor Mary sat back in her office chair and listened patiently as I whined on about my job woes as a special ed teacher in the Los Angeles public schools. I felt it was time for me to get out of the stress of teaching discontented, gang affiliated youths and try my hand at something different. But what?

“I really wish you’d consider the seminary,” she said.

Thanks but no thanks, I thought. Yes, it was true that, for as long as I could remember, I had felt an annoying voice in my subconscious urging me to take whatever rhetorical skills I might possess and use them in the service of God’s holy church. I, however, was wearing a mental set of noise cancelling headphones, still hoping I could have a career on stage and screen and become America’s greatest classical actor since Jack Barrymore. It took my pastor and some well-meaning others a long time to convince me I’d be better off—and more useful to the world—by listening to the voice which was pushing me towards becoming a pastor. I can tell you my eventual surrender did not happen overnight.

I’m not sure that any course correction or radical turn we make in our lives’ journeys ever is simple or immediate. It might take a little prodding and pondering for us to discern our proper path. The lessons in the Revised Common Lectionary for Epiphany 2, Year B speak to me of God’s patience with his recalcitrant and children. In our First Lesson (1 Samuel 3:1-20), the boy Samuel actually hears God calling him by name. Unfortunately, the poor kid has no idea this is the voice of the Lord. I find this rather disconcerting as young Sammy was basically “donated” as a child by his mom to be a helper in the Temple. You’d think the kid would’ve learned something about God being around a bunch of priests, but I guess his religious education was like modern Confirmation students—he went through the motions to please his mom, but all the theology spilled out his opposite ear while he was daydreaming about sports and girls.

God has to call Samuel three times and get him to disturb Eli the priest’s sleep before Eli figures out God is at work. I think this is pretty typical. It’s not that God is so subtle, it’s that we are often so dense.

You have to feel sorry for Eli in this story. Not only does he lose a good night’s sleep, but the prophetic mission to which his young assistant is called spells rotten news for the old priest. Eli has been an indulgent and neglectful parent, and his two sons, who will take over the family priest business, are a couple of lecherous, covetous, selfish dirtbags. God feels that, had Eli been a better dad, the boys would’ve grown up more respectful. God is pretty peeved about this situation, and plans to smite Eli and his creepy progeny. The job of telling Eli the bad news falls to Samuel—as will the job of taking over the priestly role when Eli dies. God’s people have a need for a good priest, and God knows Samuel has what it takes for the job, even if Samuel doesn’t know it himself yet. The writer and clergyman Frederick Buechner famously said, “Your vocation in life is where your greatest joy meets the world’s greatest need.” God won’t call you to a job and not give you the skills to perform it.

We have another example of God’s call in our Gospel (John 1: 43-51). There’s some reluctance here too as Nathaniel isn’t sure a prophet can come from a hick burg like Nazareth. Nevertheless, his pal Philip—not with any persuasive speech or by bludgeoning the poor guy with scripture—gently invites Nate to check out Jesus and see if his objections hold water. When Jesus makes a little joke about Israelites being deceitful,[i] Nate fires back that Jesus doesn’t know him. Jesus counters by saying he has seen Nathaniel under the fig tree. Like a lot of stuff in John’s Gospel, we have no idea what the freak he’s talking about. All the same, this seems to change Nathaniel’s mind about the guy from Nazareth.

It’s been suggested that the take-away we can have from this is that Jesus tells Nate he’s seen him. You know that pharmaceutical commercial on TV for the stuff that’s supposed to cure psoriasis or some other dermatological ailment? The one with Cyndi Lauper and the bald Driver’s Ed guy who says, “See me?” The point of the ad being that folks only saw the gross skin ailment and not the human being who was afflicted with it until this miracle drug healed them of the modern equivalent of leprosy. We all want someone to see us the way we really are, to take notice, to appreciate us and have a real relationship with the real us. Jesus does that. He truly knows us. He sees us for who we are and loves us for it. Maybe that’s what Nathaniel experienced when his friend brought him to the Lord. Nathaniel needed some coaxing, but when he met Jesus, his life was changed.

Not all of us are being called to Holy Orders, but all of us are called to be servants of the Lord. Perhaps you are being called to some kind of decision. God may be speaking to you by persistently nagging at your conscience, or God may be using a trusted friend to quietly goad you into the way you should be going. I’d encourage you to answer as Samuel is told to answer: Speak, Lord, for your servant is listening.

May God be with you.

[i] The patriarch Jacob, who was known to run a few cons in his time, was renamed “Israel” by God in Genesis 32:28.